Museum of Pilgrimage and Santiago

1. Pilgrimage as a universal phenomenon

Rather than approaching the subject of pilgrimage from an exclusively local point of view, a museum like this one, with a broad outlook, views it as a universal phenomenon that transcends any one single religion and is of far greater significance than the mere physical journey.

In these two sections of the museum, we will explore the meaning of the act of pilgrimage from both the physical and spiritual points of view. The path trod and the sanctuary at the end of it are both essential elements of pilgrimage, which have a special relationship that distinguishes them from those of any ordinary journey. This is because the pilgrimage and the way are also allegorical concepts present in most belief systems.

Pilgrimages around the world

This section shows how pilgrimage has become a universal phenomenon that varies greatly in geographical, chronological, social and cultural terms.

This centres on the three great routes: Santiago, Jerusalem and Rome. 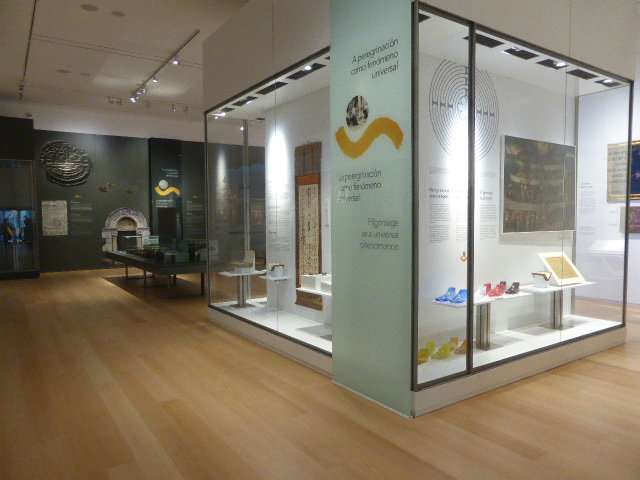 2. Pilgrimage and the Camino de Santiago

This is a broad subject with numerous varied contents.

We begin by presenting the Apostle himself under the heading St James/Santiago. History, tradition and legend, explaining his family and friendship ties with Jesus, and on the basis of the historic data and the gospel tradition within which it falls, his participation in the evangelisation of Hispania.

We then move on to the different Caminos de Santiago, their legendary origin, the historical references to them and the different routes along which the pilgrims chose to make their journey across different parts of Europe and the Iberian Peninsula.  The exhibition also shows how the development of the Camino affected the growth and consolidation of towns along the way, the improvement of the road network and other related infrastructures.

The central figure of the Camino is of course, the Camino pilgrim: his motivations, the different modes of transport used on the journey, mostly on foot, the typical symbols worn by Pilgrims in their clothing to identify them as such, and the souvenirs of the completed pilgrimage. This section also looks at complementary aspects of the Camino, such as the emergence of the Order of Santiago and the rules established to protect the pilgrims and the different institutions that appeared to help them along the way, above all those providing essential health care.  It also focuses on the interesting Camino-related travel literature in the form of guides and tales of pilgrimage, above all in Book Five of the Codex Calixtinus, a twelfth century guidebook for pilgrims who were following the Camino to Compostela, with advice, descriptions of the route and its artworks, and of the local customs of the people who lived along the way.

Another fascinating aspect of the pilgrimage is its symbols, rituals and documents. Its badges and emblems such as scallop shells, staffs or the Cross of Saint James have become essential hallmarks of those walking the Way, as are the rituals and the final document, the Compostela which certifies accomplishment of this feat. The literature and music of the pilgrimage to Santiago is also an excellent example of the importance of music and literature in all pilgrimages.

Another very important section in this subject area is the iconography or representation of the Apostel, which shows us the different ways in which he has been depicted, and how his image has been adapted to the different devotional and political needs of the time, from his initial persona as an Apostle, to that of Saint James the Pilgrim and finally to Saint James the Knight on horseback. Finally we come to the figure and the dissemination of Saint James/Santiago in the world, both in Spain itself from very ancient times and beyond in Europe and America, and the role he played as a symbol of political and religious unity in Spain after the discovery of America. 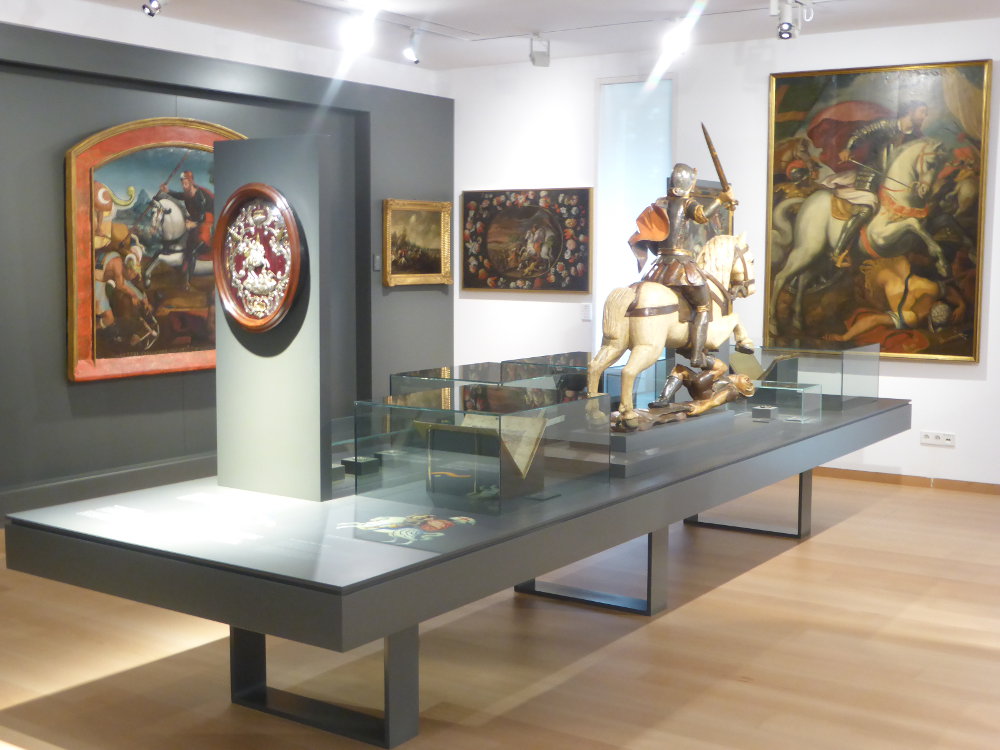 3. The city of Santiago de Compostela

The other main subject area of this new exhibition in the Museum in the Plaza de Platerías is the city of Compostela itself. This section centres above all on the sanctuary that gave rise to both the Camino and the city, the Cathedral. It also explores the urban and economic development of the city as a result of the Camino, and finally the circumstances that led to a decline in the pilgrimage and the later revival that led to its modern day peak.

The construction process of the cathedral from its earliest days is covered in A place for worship, the evolution of the sanctuary. This section explains how the earliest remains date back to a site of pre-Christian worship where the mausoleum housing the Apostle’s body was discovered. This was the origin of what is today the Cathedral and the city.  The official declaration of the site as the tomb of the Apostle led to the first profound changes.  A simple, early church was soon replaced by a larger one (the Basilicas of Alfonso II and Alfonso III), along with other religious and defensive constructions, which gradually turned the site into a town. In this way from the 11th century onwards with the boom in pilgrimages and the support of the monarchy and the Papacy, the church in Compostela embarked on an ambitious project to build a sanctuary in keeping with its status as the last resting place of an Apostle: the Romanesque church.  Over time, this church was enhanced and embellished with artworks from other periods (the Gothic project and the Renaissance and Baroque contributions).

Along with the development of the Church-Cathedral, this section also analyses the urban and economic development of the city of Santiago de Compostela, which gradually enhanced its standing in religious, political, economic and cultural terms.  Its status as the seat of an Apostle and as the capital of a very large, well populated feudal estate encouraged the establishment of religious, political, educational and health institutions, which all left their mark on the city.  In this way the exhibition looks at the initial occupation of this area in ancient times, its enormous development in the Middle Ages, the powerful feudal estate known as the "Tierra de Santiago" and the composition of the other social classes, such as the craftsmen who contributed to the splendour of the cathedral: the jet stone carvers, silversmiths, engravers and other guilds and brotherhoods.  This subject area comes to an end with a section dedicated to the decline in the pilgrimage and the historical circumstances that led to the revival of the Camino de Santiago, in its current modern-day form under the heading: The reinvention. The continuing survival of the pilgrimage. 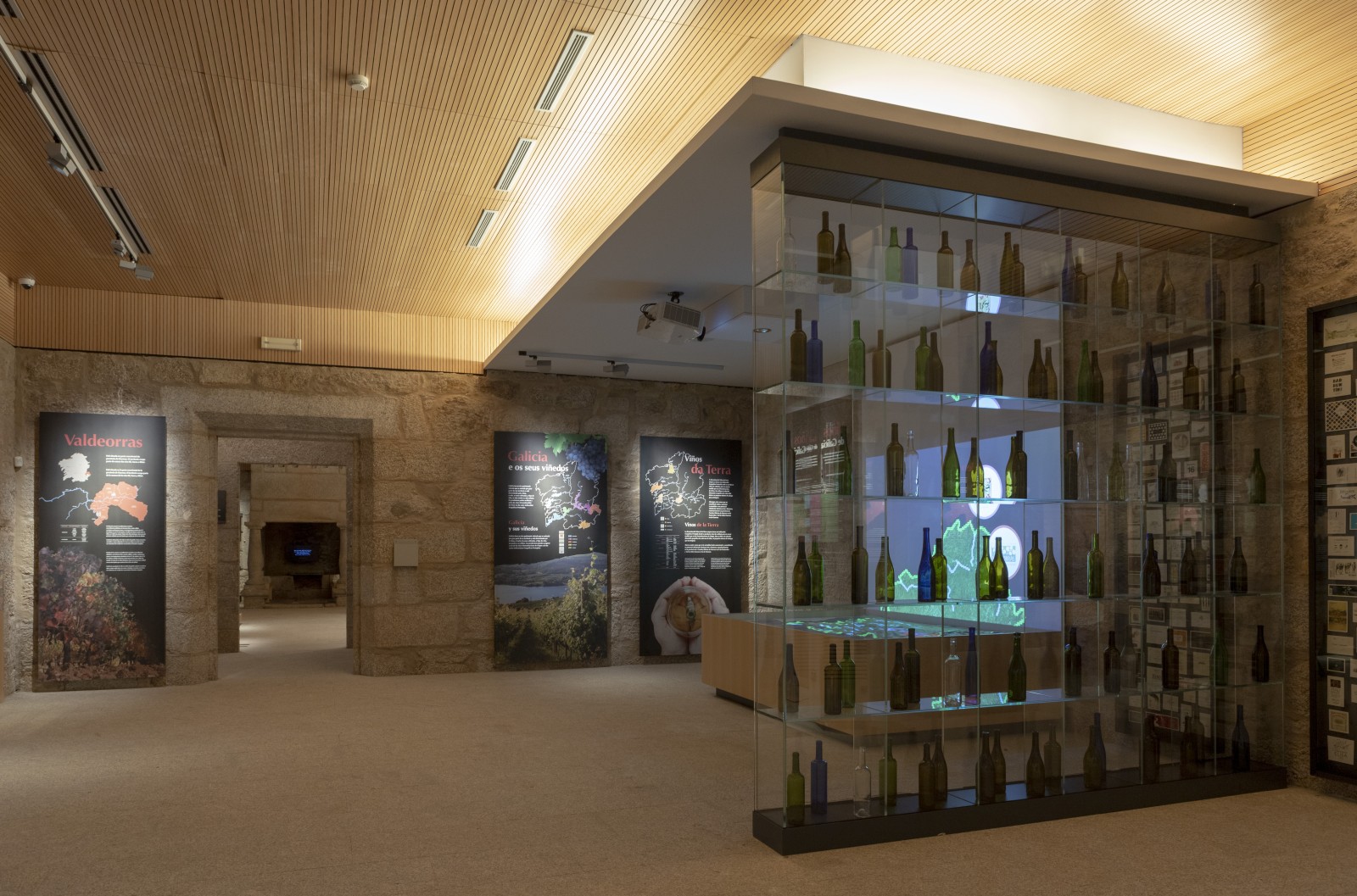