Hall 1. Creation of the wine landscapes

The contents of the Wine Museum emphasise the protagonism of the inhabitants and their link with the territory and the vine, elements that define wine culture in Galicia. The vine and the wine (viticulture and oenology) was and continues to be a characteristic phenomenon that modulates and identifies the social and geographic spaces in which it is practised.

Accordingly, in this room, we can see how the historical process of colonisation and the expansion of wine growing was a tool for organising the Galician territory, and which endows landscapes with uniqueness, with the changes and vicissitudes of time.

In addition to a small selection of pieces that exemplify these processes, the narrative is supported by an immersive audio-visual piece that shows the wine landscapes of the five current designations of origin and talks about the landscape and wine culture throughout history.

Transition hall A (between rooms 1 and 2). Galician soils for wine

The vine is a plant that adapts very well to different types of soils, producing quality wines even in those that are very poor in nutrients. The Galician wine soils are formed from granites, shales, slabs, sediments and rocks of oceanic crust, such as amphibolites.

On display in this space are soil sections from five different wine growing areas in Galicia, along with their principal characteristics.

The main activities of traditional winegrowing, viticultural cycles and their protagonists are presented, reflecting on other trades related to wine growing, and more recent changes brought about by mechanisation.

The four main cycles of the year that mark the work on the vines are shown, starting with the end of autumn and ending with the harvest, along with some of its most emblematic tools.

The material in the room is supplemented by a video showing the evolution of a vine from Santo André from Camporredondo throughout a whole year.

The area around the fireplace has historical images that associate the work of the vine with the protagonists of wine growing process.

The passage between rooms 2 and 3 affords a short break in the discourse, where there is a balcony with a cast-iron handrail which overlooks the landscape of the vine, with the valley as the backdrop and the main church of Santo André in the foreground. A skyline that highlights the most representative elements of the landscape that we can see from the museum itself.

Hall 3. Galicia and her vineyards

This space is devoted to the joint presentation to the public of Galicia's five current denominations of origin of wine (Rías Baixas, Monterrei, Valdeorras, O Ribeiro and Ribeira Sacra) and of the Wines of the Earth, which covers those areas with Protected Geographical Indication.

The main feature is a large territorial model of Galicia with a zenithal and front projection which, through aerial images, illustrates the different wine growing districts: the denominations of origin and their main localities; patrimony associated with wine, such as rectories and monasteries; the figures of grape production and the different cultivated varieties, enabling us to appreciate the richness and diversity of Galicia's wine culture.

Finally, a very simple instructional resource to highlight the rich variety of Galician wines for the public. Through a series of moving cubes, 24 varieties of authorised white and red grapes are shown, most of them native to Galicia, their territorial distribution and main characteristics, grape, leaf, etc. 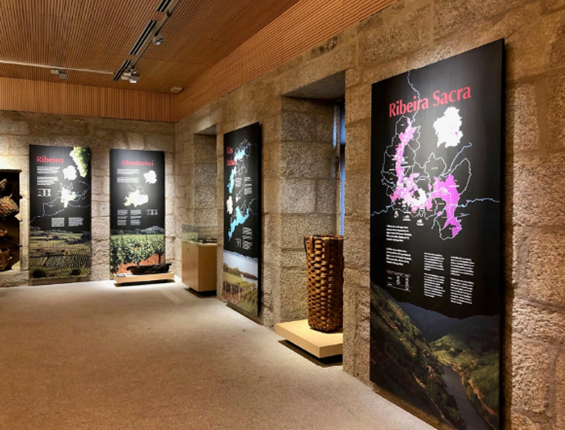 As would seem logical, the museum devotes a room to its home wine region, one of the largest and oldest in Galicia: O Ribeiro. A tour through the history, identity and development of wine growing and wine production in this region, since O Ribeiro has several significant milestones, such as its role in the calls for land reform or the birth and promotion of cooperatives.

Many other aspects that stand out in the Ribeiro are addressed in a Virtual Mini-Theatre, with its own timeline, such as the explanation of O Ribeiro's "toasted" wine from 1862, the wine marketing processes from 1909, the cooperatives in O Ribeiro from 1973 or the renowned Wine Fair of today. 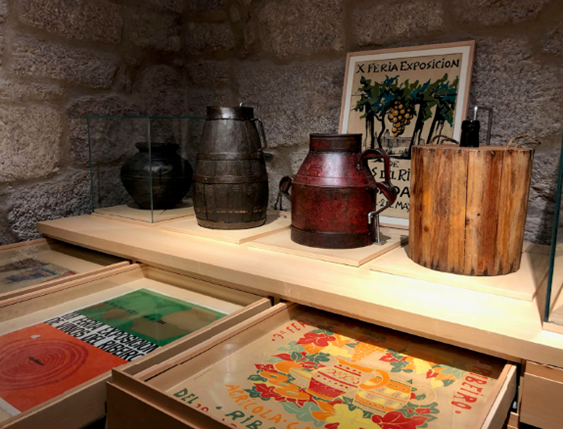 On a mezzanine floor, a block of information is introduced on the viticultural production in monasteries and the context that gave place to winery facilities, such as Santo André, with the figures of farms and priories in Galicia.

The Balcony of the Wine Presses

On the balcony overlooking the wine presses, there are diagrams depicting what were are going see on the lower floors, with information on the operation of the wine presses in Santo André. 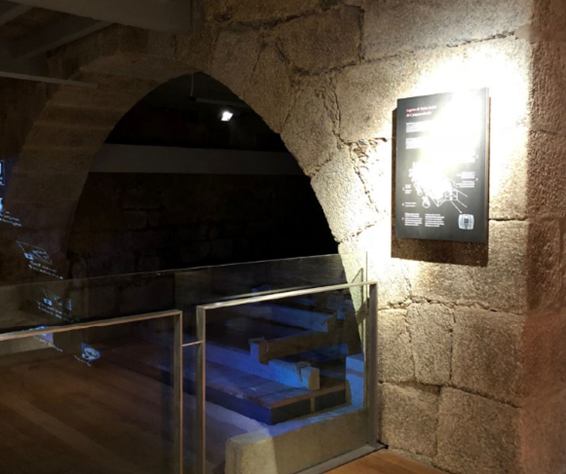 Hall 6. The arrival of the grape

The lower floor, which can be accessed directly from the outside, served as the grape's access to the wineries, which marks the beginning of the oenological area in the museum's discourse: the transformation of the grape into wine also requires of an explanation of the work process, tools and forms that are obtained to obtain the different types of wine. With the grape's arrival at the wine press, the processes of transforming the grape into wine begins. 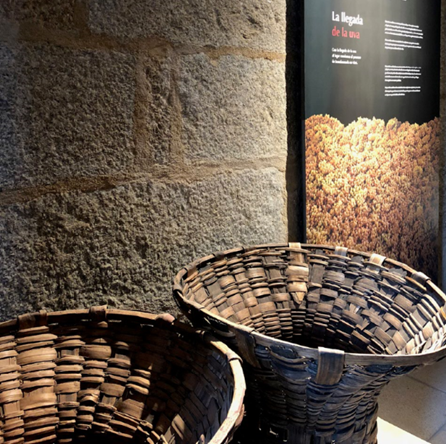 This is a large stone hall where the five stone wine presses that came to be used in this building were located, and of which two still remain.

In this space we can learn about the types of wine presses and the process of obtaining the grape must through the use of wine presses, crushers and extractors.

But the protagonist of this space is, undoubtedly, the immersive audio-visual piece, which recreates the operation of one of these wineries. 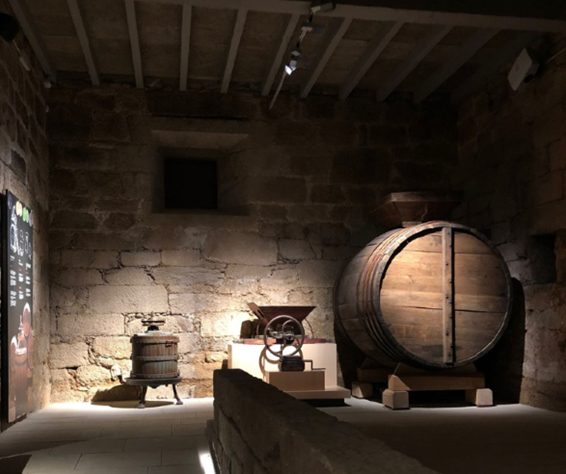 Hall 8. Wine in the wine cellar

In the final room we come to the transformation of the must into wine. The winemaking processes are explained and, through a highly didactic manipulative method, the different steps of wine making are analysed and experienced.

The importance of trades directly related with a winery is also highlighted: the figure of the coopers and their tools. It is rounded off with videos of real images of coopers making barrels and casks in the Ribadavia area, and which offer documentary evidence of trades that have already disappeared.

The Santo André wine cellar is an exceptional element of this building. It is made up of two galleries in which the process producing and conserving the wines that would head off towards Compostela was completed. Hewn out of the rock, it pre-dates the construction of this building, at which point vaults or arches were presumably added to strengthen its structure. 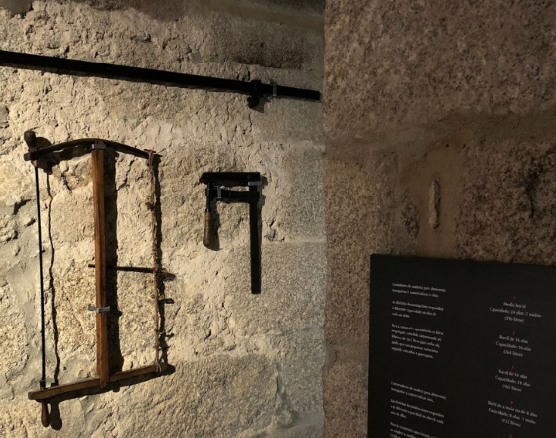